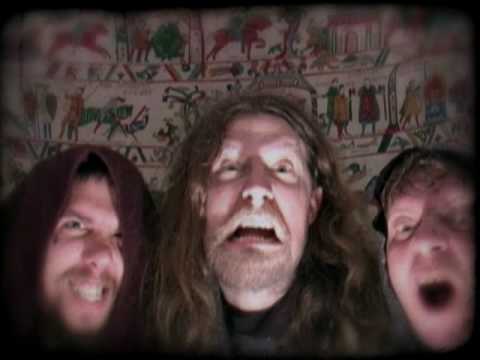 After years of secretive quests in faraway exotic lands, Sir Jaldaboath found his way back to his British homeland. Shortly following his arrival, he joined forces with The Mad Monk and Sir Bodrick to establish the Order of Jaldaboath. After several meetings underneath the shadow-casting arches of Castle Rhydian, the dark order presented its unique brand of heraldic Templar metal. The style combines an intoxicating mix of metal, Middle Ages, and Monty Python, while remaining innovatively fresh and distinguishing itself from the Medieval rock sounds of already established bands. Catchy melodies, galloping drums, exquisitely sarcastic and humorous lyrics, and Sir Jaldaboath’s unmistakable clean vocal style makes songs such as “Hark the Herald” or “Seek the Grail” impossible to resist. The band’s
debut “The Rise of the Heraldic Beasts” easily transports the listener to a world of knights, fair and noble damsels, fire-spewing dragons, and cheeky jesters. So sound off the trumpets and wave your colorful banners from the highest towers, for Jaldaboath rides out to embark on a new musical crusade! Fans of Alestorm’s extraordinary Scottish Pirate Metal will love
Jaldaboath’s heraldic Templar metal!
Produced by Death To Music
Order @ Napalm:
http://shop.napalmrecords.com/the-rise-of-the-heraldic-beasts.html